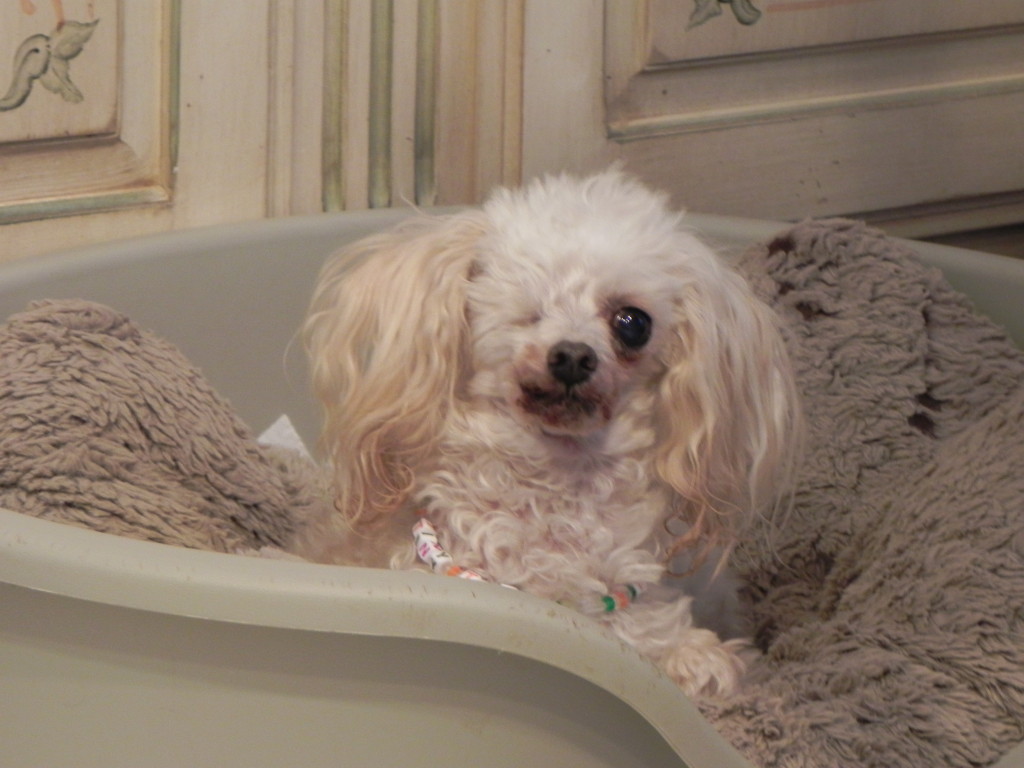 Tiny Tim was a little white poodle. What made him special was his big personality! This long-legged, one-eyed, toothless, little seventeen-year-old came to HWAH with his brother Sir Shag, from the Caroline County Humane Society, where they had been surrendered by their owner. He was a feisty little guy who, while extremely attached to his Mama Sher, wasted no time trying to nip the hands of others who tried to give him a pet. He didn’t let any of the other pups disturb him and wouldn’t hesitate to let them know how he was feeling. Tiny Tim most certainly never learned the meaning of “small.”

From Christmas December 2013
“Even though TT, as we affectionately call him, has no teeth and only one eye, he sure is scrappy. He’ll stand up to dogs ten times his size if they dare venture into his area. He doesn’t realize how wimpy his snarky bark sounds. So cute! Even though losing his teeth was a bad thing, he’s just so darn adorable with his tongue sticking out.

Tiny Tim loves Mama Sher and follows her around everywhere. When she’s outside he goes from door to door and window to window looking for her.

He’s in competition with Tiny Tio for the title of Toughest Tiniest Terror”.

From December 19.2015
“While we had hoped to bring TT home from the hospital for a little while, his deteriorating oxygen therapy-dependent condition didn’t allow us to do that. Mamas Sher and Harriette were with him at the beginning of his new journey, while volunteer Wendy tended to the gang at the Sanctuary. Our little boy left us in the arms of his beloved Mama Sher.

Rest Easy, Little Man. Sir Shag and so many others are waiting to greet you”.