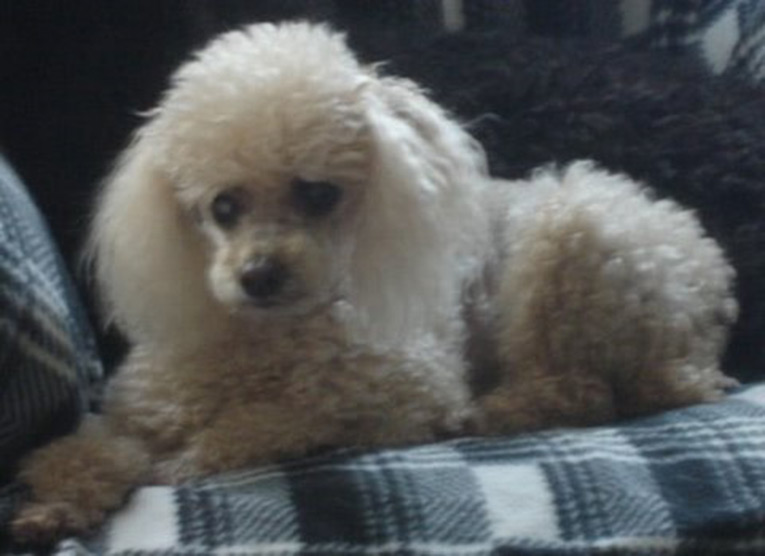 “Candyman (or Candy, as he’s best known), is the Sanctuary’s senior statesman and the last of HWAH’s “originals”.  Years ago, Candy, a handsome champagne miniature poodle, was brought to the Montgomery County Humane Society after his owner passed away.  When he arrived at the Sanctuary, he was one traumatized little guy.  But, with the love and care he received from Sher and her late husband, Joe, Candy evolved into a cuddly little love bug.

Our sweet boy recently suffered a stroke which, unfortunately, has led to a touch of dementia.  But nothing can diminish Candy’s love of food, playing with his treat ball, and cuddling at night with his best girl, Sher.

Candy’s Guardian Angel, Katrin, says that Candy “can nap like no other- when he wants to settle down, he passes out on a bed and makes sleep look like the most heavenly thing!”

Katie, who spends time every Saturday with Candy, had this to say about him: “He went from biting out of pure fear to snuggling with everyone…  He is a handsome boy who loves to love and be loved.”

I am heartbroken as I tell you that Candyman crossed the Rainbow Bridge last night.  Candyman was the very last of the original HWAH rescues.  He made a complete turnaround from being scared and aggressive to being a loving happy dog as the result of the efforts of my husband, Joe, before he passed on in 2008.  Candyman was 18 years old and lived a good life with many volunteers caring for him.  For years he was my sleeping buddy until dementia set in and he was more comfortable in his bed in the kitchen.

Last night, Kat took Candyman to the ER and Harriette met her there, and together they let him know he was unconditionally loved to the last second of his life.  I was so worried that he would be agitated and his last hour would be stressful, but the wonderful folks at VCA treated him with the utmost care, and he crossed over peacefully”.