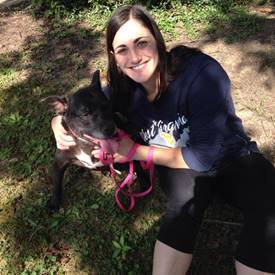 “Rest easy, my sweet Gracee girl. Our time together on this earth was short, but it was filled with love” Julie H.

Normally stories start at the beginning, but we found out last December that Julie’s senior friend, Gracee passed away after Christmas. But here is her story as told to HWAH by Julie’s mom Andrea H:

“Julie has always been an animal lover and has two cats, but until she met Gracee, she’d never had a dog of her own. Julie works at a brewery and this fall she organized an adoption event there with the local animal shelter. As she worked the event, Julie found herself drawn to a sweet-looking black lab mix with a greying muzzle. By the end of the day, most of the dogs had been adopted, but no one had expressed any interest in the dog Julie had noticed.

The volunteers from the animal shelter told Julie that ten year old Gracee had been with them for over a year, and was their favorite dog because of her sweet nature. They brought her to every adoption event hoping someone would see what they saw in her, but she was always passed over as too old to adopt. Julie learned that Gracee had come to the shelter with a letter from two children who had to part with their pet: “Please take good care of Gracee. She’s a good dog.” Julie filled out an application, and a few days later Gracee was hers.

Gracee made an easy transition into Julie’s home and got along well with the cats. Though a bit slowed down by age, Gracee acted like a puppy whenever Julie came home or even just re-entered a room, squealing delightedly and thumping her black tail. Julie loved her, and was happy to know that Gracee can spend the rest of her life in a forever home.

Gracee died suddenly the day after Christmas. She had been fine on Christmas Day, eating and enjoying a walk in the snow in her new jacket with her name on it. The next day she woke up unable to see and bumping into furniture. She died at the vet while they were examining her eyes. An x-ray showed advanced cancer. Julie is very upset as she had become really attached to Gracee in the five months she had her. But her Mom reminded Julie that she fulfilled her mission – to give this dog a loving forever home for however long she had left to live. Gracee died knowing she was safe and loved”

P.S.  I have some good news to share about my daughter Julie.  I know you remember the story of the loss of her adopted senior dog Gracee the day after Christmas.  Well, she got a call from the same rescue she adopted Gracee from saying they had thought of her for a particular dog who had just been rescued from euthanasia at a kill shelter.  Though not a senior, this dog, Lulu, a boxer mix, was special in that she looked very unappealing because of a skin condition that had caused her to lose a lot of fur, especially on her face.  The kill shelter thought she was unadoptable.  The rescue people disagreed and called Julie.  They told her that Lulu would not win any beauty contests, but was obedient and affectionate and needed a loving forever home.  Lulu has been with Julie for a month now and is a total sweetheart.  They are both so happy!

Won’t YOU think about fostering a senior pup and making their life SPECIAL!!!????  Contact hwah.lori@yahoo.com or check out our Forever Foster page for ways you can help.