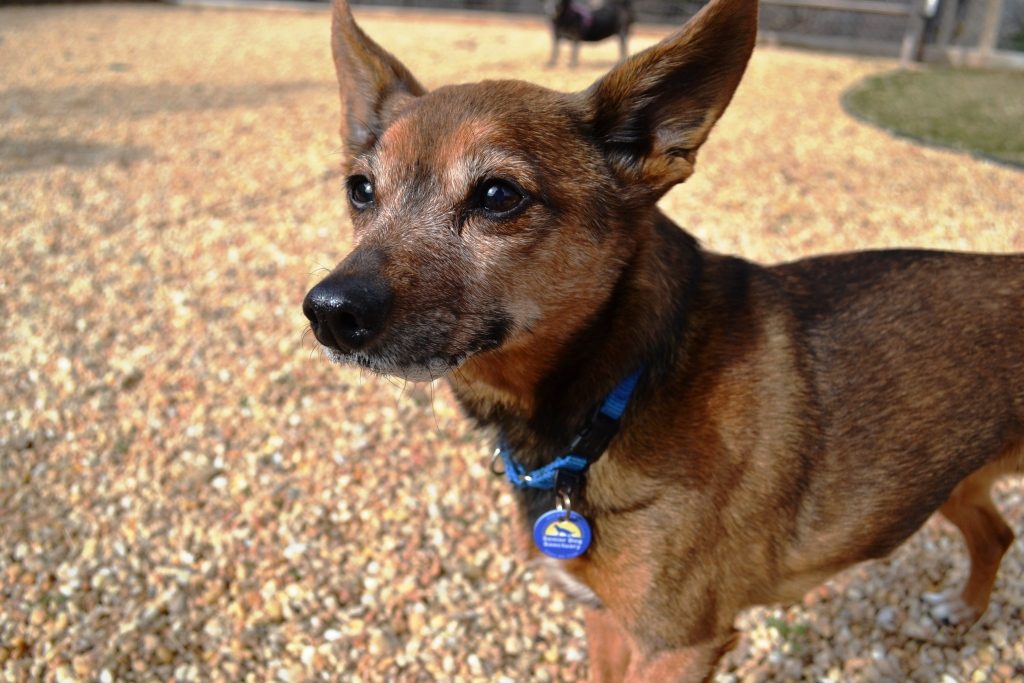 Wrigley lived with his human family, along with his Mom, a Miniature Pinscher and his Dad, a Pomeranian.  They had a long life with their family as Wrigley was 15 years old and his Mom 16 years old when the three of them were turned into the local Animal Shelter.

The Dad, a handsome Pomeranian was quickly adopted but Casey and Wrigley were left behind.  At every adoption opportunity the pair was passed over until they had been at the shelter for so long that the staff began to feel concerned.  They reached out to the Rescue community and the pups were transferred to the Senior Dog Sanctuary of MD.   Again no one seemed at all interested in the pair, so they came to live at HWAH where they could be in a more home type environment and get lots of loving from the HWAH Volunteer family.

Wrigley is a cute combo of Min Pin and Pom.  He is a lovely honey brown with black accents, big expressive eyes, ears that are constantly in motion keeping track of his surroundings, and a tongue that hangs out the side of his mouth that just goes on forever!!!

This easy-going pup gets along with everyone and if any other dog seems to have a problem with him he just moves off in another direction.  He is quiet and calm until a meal is at hand and then he becomes quite animated, jumping and barking and insistent that he be first in line.

Wrigley is not a fan of being picked up, he isn’t grumpy about it, just fearful.   He does love when he gets the spa treatment, wiping off with a warm cloth, brushing, ear cleaning and face washing will bring out little groans of happiness from him and he will happily snuggle up in a lap for a long nap.

He doesn’t see as well as he once did so when giving him a treat we have to make sure he sees his treat or he will lose it to one of his pack mates.  Even then he is easy going and just looks confused about where his cookie might have gone.

Wrigley does have to wear a belly band as he has never seen a post, a pillar, a couch or chair that he doesn’t feel is crying out to have HIS scent on it!!   We laugh as he lifts his leg all around the house and when he looks up inquiringly we just tell him THAT is why he wears a belly band!!!