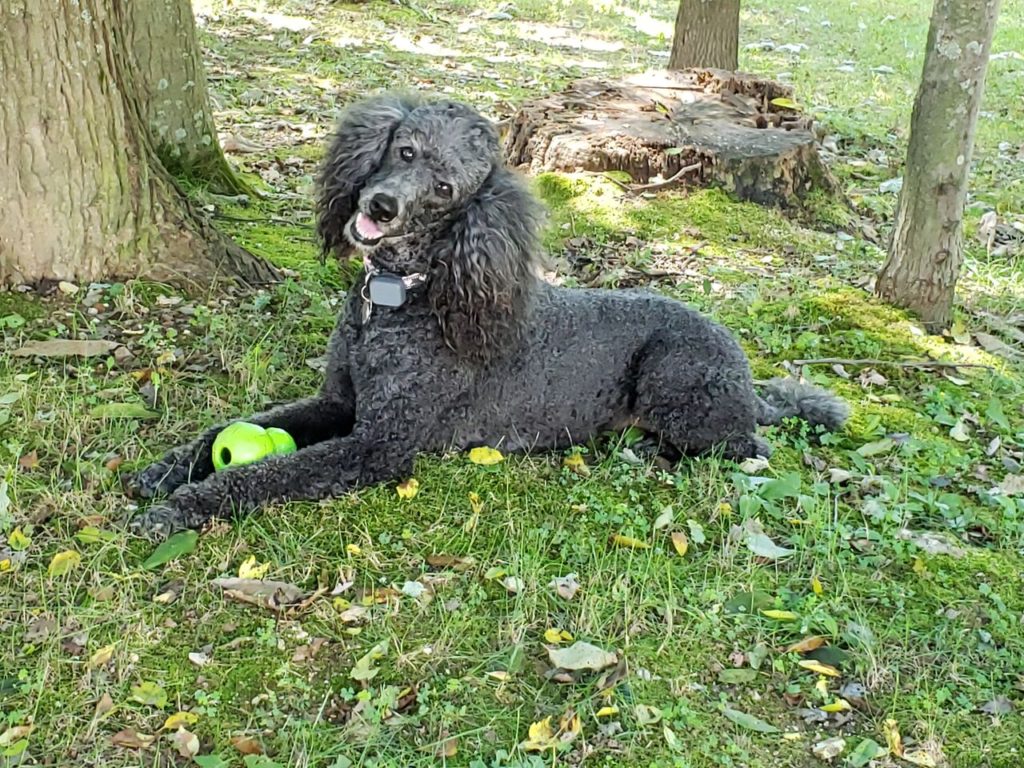 To tell you about Joie, first I have to tell you about Dolly.  Dolly was the last gift to me from my husband Joe.  He took me to Frederick on Valentine’s weekend in 2008 to pick up this little black poodle ball of fluff.  He asked me to name her Dolly – because his pet name for me was “Doll”….  He said each time I called her I would think of him.  Joe passed a month later on March 22nd.  No doubt that Dolly was so very important to me.  She was a little lady and had a kind and sweet spirit.  When she was 4 years old she developed a slight limp.  We had her checked by several doctors and specialists and could find nothing wrong and it was only sporadic so we stopped worrying.

In the Fall of 2013 when Dolly was almost 6 years old, our Groomer noticed a tiny lump in her leg and we soon learned that it was cancer.  We thought that surgery would be the cure but during the preparation for her surgery the Oncologist found that the cancer had spread and was in her lungs.  By September we knew that at some point I was going to lose my sweet girl.  All of the volunteers, and doctors were also heartbroken and on November 12th, 2013 we let Dolly go.

While I had been struggling with knowing when would be the right time to say goodbye to Dolly, the HWAH Volunteers got together with our then VP, Harriette and our Treasurer, Jacquie and planned on surprising me with an incredible gift that they felt would take away a little of the sting of losing Dolly and keep me busy and lessen my grief a bit.  They secretly spread the word and everyone pitched in to help.

I had already made inquiries into getting a silver standard poodle through the Mid-Atlantic poodle rescue and thought that I might find a silver poodle, but things did not work out and the silver poodle plan fell through.  In the meantime, this incredible team of loving people made sure that an adorable black standard poodle puppy that looked just like Dolly arrived at our front door right at the time of my birthday at the end of December 2013.

This little puppy was such a delight and certainly did keep me busy along with my caring for the HWAH residents and visitors.  I named her Joie because in French that means Joy and we pronounce it Joey so each time I call her I think of my Joe.

Joie grew into a bundle of energy and high spirits – not one bit like Dolly who was more sedate and calm.  This does give me lots of laughter, and also exasperation at times.  I often look at Joie and tell her she is no DOLLY, and then I have to smile because this is good – I remember Dolly in that moment and then appreciate Joie and her unique wicky wacky personality in the next moment.

Joie has so many special friends in our team of volunteers and loves playing ball and getting special attention from all of them.  Her special Guardian Angel is Joan who comes to spend several hours with Joie once a week.  Joie looks forward to her time with Joan and I am so grateful that my puppy has so many who love her and help to make her life really special.

Joie will be 5 years old on October 23rd, and we will be remembering her arrival at HWAH and how so much love went into her coming to be here.